Francesco Molinari Is Your
2018 OPEN CHAMPION

Another Year and Another Phenomenal Open Championship

From Molinari’s win to Ryder Cup implications, we have you covered 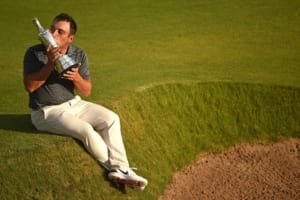 Molinari finished at 8-under par to win the Open Championship on Sunday, July 22, 2018 at Carnoustie Golf Links

While Saturday may have provided the field with scoring opportunities aplenty, Carnoustie would not play so friendly on Sunday at the 147th British Open. Harsh wind and the pressure of a final round at a major championship yielded far fewer birdies and a significant uptick in bogeys or worse.

But when it was all said and done, Italian Francesco Molinari put together an impressive streak of 37 holes without a bogey to emerge with a two-stroke win. Not only was it Molinari’s first major championship, but it was also the first time a player from Italy has ever won a major. Finishing at 8-under 276, Molinari’s score was good enough to be two shots clear of Rory McIlroy, Justin Rose, Xander Schauffele and Kevin Kisner.

His second victory in a month on the PGA TOUR, Molinari is once again qualified for the Dell Technologies Championship at TPC Boston from August 30 to September 3.

For golf fans in Northeast Ohio, the chance to see the 2018 Open Champion will be available at the WGC-Bridgestone. The tournament is August 2-5 and will be the last time the prestigious WGC event will be played at Firestone. To get your tickets for the WGC-Bridgestone, you can click here.

For Jordan Spieth, it was another disappointing finish to add to the handful of them he has had in 2018. In the 18 tournaments Spieth has played this season, he has yet to win.

Also, Spieth has missed the cut five times so far this season. That tally is equal to his missed cuts in 2016 and 2017 combined. For the most part, the issues with his game have been the result of his putting. Take, for instance, his strokes-gained putting stats. In 2016, he finished the season 2nd on tour in the category and in 2017 finished 42nd. To this point in 2018, he is currently 177th.

All of that said, Spieth’s performance at Carnoustie was full of promise and may have provided him a building block to gain momentum for the rest of this season.

His T-9th finish was his best finish since The Masters, where he finished a solo 3rd.

His putting was improved at Carnoustie, where he managed to average 29 putts through his four rounds. When it comes to making putts, it is often about a player’s rhythm and confidence, and Spieth may have just found a little bit of both going  forward.

What Almost Was Shows What Could Be for Tiger Woods

Tiger Woods vaulted himself up the leaderboard on Saturday with a stellar score of 66 (-5). For the first time in nearly a decade, Tiger Woods was in the mix with a legitimate chance to win a major on Sunday.

Woods played his first nine well, finishing at 2-under par and in share of the lead. However, holes 11 and 12 proved to be the demise of Woods’ charge to his 15th major championship. He would double bogey the par-4 11th and follow that with a bogey at the par-4 12th. He did bounce back with a birdie at 14, but the lead and his momentum was all but lost at that point.

For Woods though, he has shown that he has every bit a chance of winning another major championship as anyone in the field.

“Yeah. I mean, not the Tiger that, you know, Phil and Ernie and those guys had to deal with. It’s a different version. But he’s right there. He’s right there. He’s getting himself in the mix. … He’s healthy. I wouldn’t say we’re worried about him, but he’s one of those guys that’s always in with a shot,” explained Rory McIlroy. “Even though he’s won 14,” Rory McIlroy said, “you have to learn how to get back.”

Woods has already shown that he can regularly compete in tour events, including majors. He’s already shown that the Spieths, McIlroys, Dustin Johnsons, Justin Thomases and Patrick Reeds will have to worry about him, whether or not they care to admit it.

As a consolation prize, Woods did play well enough to qualify for the WGC-Bridgestone at Firestone. One of his favorite tour events and home to some of his greatest successes, don’t be shocked to see a charging Tiger in red in Akron on August 5th.

Fowler Hangs Around For a T-28th Finish

Rickie Fowler was right where he wanted to be on Saturday. He was 2-under on the day and 5-under for the tournament. The Scottish gallery was buzzing. Dry, wind-free weather made Carnoustie ripe for the taking.

Was this the year, the tournament, the moment when Rickie Fowler would get the monkey off of his back?

That question would be answered in short order as Fowler’s hopes to win the Claret jug stunningly and painfully imploded:

A brutal triple-bogey 8 at the par-5 sixth hole would all but end his run. He yanked his tee shot left and out of bounds. His re-tee went 40 yards right. The model of inconsistency, his day included an eagle at 14 to go with three bogeys. A 2-over-par 73 third round left him eight shots off the lead, without many answers or any version of reassurance.

The world’s seventh-ranked player will again be on watch in steamy St. Louis. The question lingers: Can Rickie Fowler break through and win a major? As he approaches 30-years old, Fowler is nowhere near the end of his career. But, he is nowhere close to being a newcomer, either.

How about 24-year-old Xander Schauffele?! He joins Jordan Spieth at 9-under. https://t.co/M2uYPmwWnp pic.twitter.com/AGWGYXGwL0

Playing in a final group at a major for the first time, American Xander Schauffele awkwardly splashed in and out of three pot bunkers, shot a 40 on the frontside and still somehow had a chance to win at Carnoustie.

Playing the 17th hole, tied with Francesco Molinari, Schauffele flared his approach shot into the right rough and couldn’t get up and down for par. He dropped one shot behind Molinari, and then two, after the Italian birdied the final hole.

In just two holes of play, Schauffele went from potential winner to a runner-up finish at The Open.

“A little bit of disappointment,” he said. “Obviously when you don’t win, you’re disappointed. Hats off to Francesco. I looked up on 17 and saw he got to 8 under, which is just incredible golf and an incredible finish.”

Schauffele did well to give himself a chance. The 24-year old was in the final group with Spieth, but both youngsters fell off the pace after rocky starts. He birdied the 14th but couldn’t convert a 15-footer on the treacherous 16th that would have given him a one-shot cushion.

“It’s going to go in the memory bank as a positive,” he said. “I had a chance to win a major championship. I was in the final group. I had to face a little bit of adversity early in the round, and I still gave myself a chance. Anyone can look at it however they want to, but I’m going to look at is as a positive moving forward and try to learn how to handle the situations a little better next time.”

His future is bright, that much is unquestioned.

But one has to wonder if the mindset of putting this into the memory bank as a positive is just ‘media-speak’ or if the young player really does find finishing 2nd (in a tournament he should have won) a positive experience.

The stage is set. #TheOpen pic.twitter.com/5yiwmOybti

Carnoustie Proves Its Worth Once Again

Carnoustie sends the world’s best away fully-tested but in no way feeling slighted of chances to display their scoring abilities. A bogey-free British Open weekend by Francesco Molinari allowed the 35-year-old Italian to edge an all-star cast and leave little doubt about Carnoustie’s ability to reward a blend of ball striking, course management and short-game touch. Even with hefty winds and an ever-changing leaderboard , the golf world departs this baked-out links appreciating its qualities more than ever.

“The quality of golf required to play around at Carnoustie is high,” Paul Casey (T-51) said. “It’s not the prettiest links we play in the rotation, but it’s probably one of the strongest, maybe one of the toughest. It’s got something.”

“So the beauty of the golf course is there’s a lot of different ways of playing it,” Harrington said. “But eventually you’re going to have to grow up and hit the shots.”

The R&A setup at Carnoustie could very easily have been criticized by players for attempting to place way too many hole locations in anti-scoring locales. The design’s quality and conditioning prevented what would have been legitimate griping about an excessive number of holes cut on knobs or way so close to edges.

One annoyed caddie for a tournament contender labeled them “infinity cups” and suggested they were an excessive anti-scoring effort by the R&A.

“Unnecessary and a tad insulting given how much they claim to not care about the winning score,” the looper said, requesting anonymity because he was not authorized to comment.

Tiger Woods tried to be diplomatic when asked about some of the cup locations. “A little bit different,” he said with a smile, choosing his words carefully when speaking of two in particular during Round 3.

All in all, Carnoustie delivered in every way for the 147th Open Championship. It was difficult but fair, allowed conditions to play a role and ultimately provided the golfing world with one of the best major championships in years.

“It’s a beast of a course,” Molinari said. “I don’t think anyone feels too confident when they stand on that first tee at Carnoustie.”

Given its 2018 performance for the R&A and a golf world starving for a satisfying week, hopefully the wait won’t be another 11 years for the next time golf’s best are asked to tackle Carnoustie once again.